Patients with neurodegenerative diseases suffer from a range of symptoms like difficulty in movement, tremors, forgetfulness, loss of ability to think clearly, etc.

Though there are medications to control the symptoms of the disease and to slow its progress, currently there are no cures for these diseases.

Apart from genetic causes, studies have linked a number of other factors contributing to the development of these diseases. Trying to eliminate these factors will help to slow the progression of the disease considerably and enable the patient to achieve a good quality of life.

Improving oxygen supply to the brain:

Impaired oxygen supply (hypoxia) or reduced blood flow (ischemia) induces substantial deleterious changes in the neurons of the brain. When the brain is starved of sufficient oxygen over a prolonged period of time, the neuron injury can accumulate leading to degeneration. Studies have linked blood vessel changes and reduced blood supply as an important factor in the development of Alzheimer’s Disease, Parkinson’s and some Dementias.

With the help of Medical Ozone Therapy, both the hypoxia and the ischemia can be corrected. By increasing 2,3-DPG concentration in Red Blood Cells (RBC), Ozone Therapy increases oxygen delivery to tissues thereby reducing hypoxia. By stimulating the production of Nitric Oxide (a vasodilator), it increases blood flow to all regions. By making the RBCs more flexible, the viscosity (thickness) of the blood decreases and it is able to flow freely even through the tiniest blood vessels.

With Hyperbaric Ozone Therapy, stem cells get stimulated which will further enhance improvement in symptoms and slowing down progression of the disease.

Inflammation is a biological process which our body mounts to clear infections and heal damaged tissue. However, when the inflammation doesn’t get resolved, it can start damaging the normal healthy tissue leading to the development of chronic diseases.

Chronic low-grade inflammation plays a key role in the pathogenesis of neurodegenerative diseases. Chronic inflammation from any cause like a chronic infection, Leaky Gut, obesity, heart disease, etc. in middle life can increase the chances of developing a neurodegenerative disease in old age. Inflammatory cytokines (chemical messengers which mediate inflammation) can cross the blood-brain barrier and can damage the neurons. The damaged neurons in turn will elicit more inflammation and the process continues for years. This prolonged chronic neuro-inflammation can initiate or sustain the plaque deposition and protein tangles seen in Alzheimer’s and Parkinson’s.

With the help of IV Anti-oxidants and other therapies like Medical Ozone Therapy, the body’s stores of anti-oxidants can be increased and chronic inflammation can be reduced. The anti-oxidants will prevent the inflammatory cytokines from causing oxidative damage to neurons.

The gut-brain axis is a complex interaction of nerves and chemical messengers (neurotransmitters) between the brain and the intestines. Seventy percent of the neurotransmitters are produced by the bacteria in the intestines which proves that the gut microbiome (the trillions of bacteria living in the gut) has a major influence on brain function. 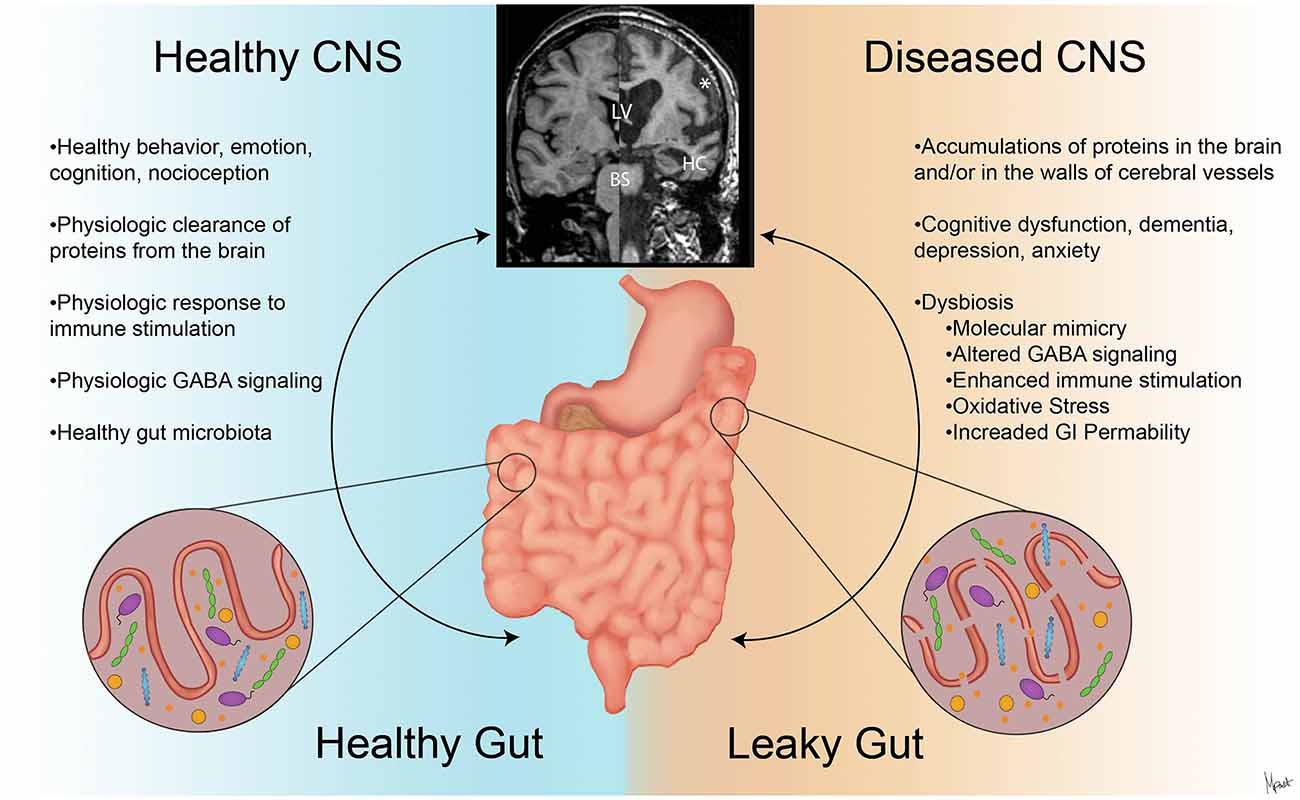 When the gut microbiome is disrupted and the intestinal barrier is injured leading to “Leaky Gut”, toxic by-products like Lipopolysaccharide (LPS) can leech into the blood stream causing widespread inflammation. The LPS can also travel through the vagal nerve (the nerve connecting the brain and the gut) and cause formation of protein plaques leading to neuron death.

Studies have shown that optimizing gut health improves symptoms in patients with Parkinson’s, Alzheimer’s and some dementias.

Mitochondria are called the powerhouses of the cell because they are responsible for the production of energy. When the mitochondria is damaged, it can lead to the formation of excess free radicals which can cause oxidative damage to cells and lead to cell death.

Mitochondrial damage plays a key role in the development of late-onset neurodegenerative diseases. When the mitochondria is damaged, ATP generation at neuron synapses is affected leading to defects in communication between neurons.

With the help of metabolic therapies like Mitochondrial Booster and supplements to improve Mitochondrial function and energy production, the progression of these diseases can be delayed.

By treating the above factors with a holistic approach, the progression of neurodegenerative diseases can be slowed down considerably. The quality of life improves and the patient will be able to perform day to day activities independently.