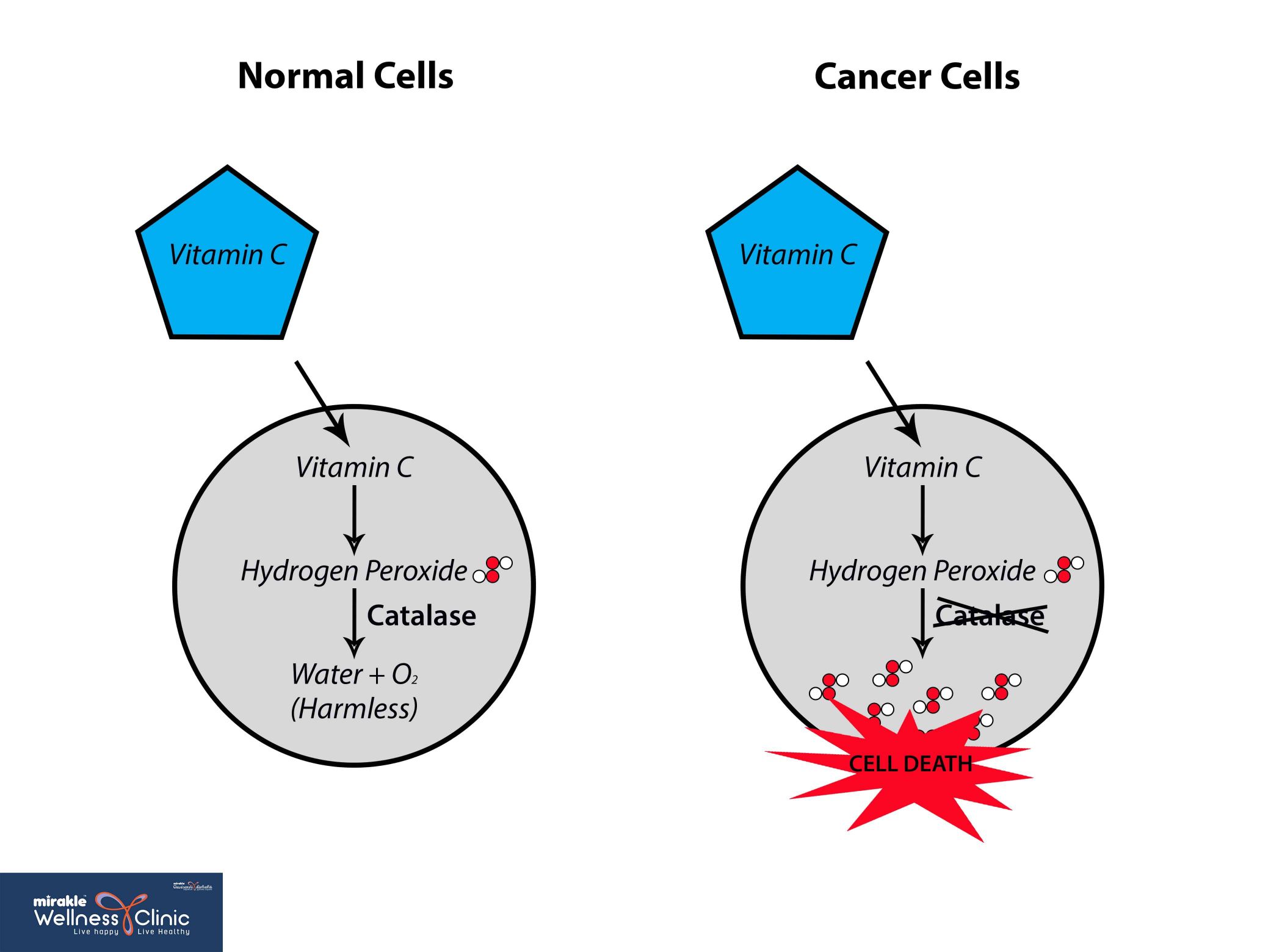 What is Vitamin C?

Vitamin C, also known as Ascorbic Acid, is a water-soluble vitamin mainly present in citrus fruits, cruciferous vegetables, bell peppers, etc. It is involved in several important biological functions such as wound healing, collagen synthesis, regulation of gene expression, maintaining genomic stability and it is a co-factor for various enzymes in our body. It is also a potent anti-oxidant. Unlike most mammals and animals, humans do not have the ability to synthesize Vitamin C. Hence, it needs to be supplemented on a daily basis.

Vitamin C and its effects on cancer was popularised in the 1970s based on the research of Dr. Linus Pauling (Nobel laureate) and Dr. Cameron who concluded that High Dose Vitamin C improved the survival of cancer patients.

Research in the 1990s highlighting the important differences between oral and IV Vitamin C pharmacokinetics has resulted in a surge of new research in the IVC field with numerous in vitro, preclinical and clinical studies showing promise.

The finding that cancer patients have a higher requirement for Vitamin C indicates a lower body pool and the higher oxidative stress and pro-inflammatory status of these patients.

It is interesting to note that animals which can synthesize their own vitamin C increase the production of vitamin C when under a tumour burden suggesting enhanced requirements.

I. Generation of Hydrogen Peroxide

Vitamin C has the ability to act as an anti-oxidant or pro-oxidant depending on the dose administered. In the treatment of cancer, we want a “pro-oxidant” action. When administered, Ascorbic Acid (Vit C) generates Hydrogen Peroxide (H2O2) around the tumour environment and inside the cancer cells. The Hydrogen Peroxide (H2O2) in turn exerts a killing effect on the cancer cells. Normal, healthy cells are protected from this effect because they contain the enzyme “catalase” which can break down the H2O2 into water and oxygen. This same enzyme is absent in cancer cells leaving them susceptible to destruction by High Dose Vitamin C.

Studies have shown that oxidative stress, chronic inflammation, and cancer are closely linked. Oxidative stress is a condition in which excess free radicals (from chronic infections, heavy metal toxicity, pesticides in our food, etc) damage the cellular components and the DNA leading to the development of cancer. Vitamin C is a powerful antioxidant both in plasma and within cells due to its ability to scavenge a wide range of free radicals, thereby protecting important components of the cell (DNA, proteins, cell wall) from oxidative damage. Patients with cancer tend to have elevated free radicals and elevated markers of inflammation, such as C-reactive protein and pro-inflammatory cytokines (IL-1, IL-6, TNF-alpha). In such patients, administration of High Doses of IV Vitamin C decreased the levels of all the mediators of inflammation (CRP, IL-1, IL-6, TNF-alpha).

Our immune cells (leucocytes) have 10 to 100 times higher concentration of Vitamin C compared to the blood and any other cell. This suggests that Vitamin C plays a key role in immune system function. Our immune cells require Vitamin C in every step of the process from maturation of cells, detection of microbes, detection of cancer cells to the killing of the same microbes and cancer cells. Cancer patients generally have a compromised immune system. High Dose Vitamin C helps immensely in such patients by boosting immune function.

One of the important roles Vitamin C plays in the human body is the synthesis of collagen. This is why in scurvy (a severe form of Vitamin C deficiency), impaired collagen synthesis leads to bleeding gums and non-healing wounds.

Tumours are usually enclosed in a collagen capsule. By giving High Dose Vitamin C, the tumour capsule becomes strong and the chances of metastases goes down.

These high concentrations are relatively transient due to rapid clearance by the kidneys, resulting in a half-life of about 2-4 h in circulation.

What about Oral Liposomal Vitamin C?

Liposomes are tiny “nano-size” fat soluble vehicles for carrying nutrients to the body’s cells. Liposomal vitamin C is packaged like a bodily cell so it passes through the digestive barrier and delivers the nutrient directly to the bloodstream.  This has a much higher absorption rate of around 90%.

High dose IVC has been in use for many decades by Integrative Medicine practitioners all around the world. Most side effects are related to local vein irritation and rarely minor fatigue.

A minor product of vitamin C metabolism is oxalate (only 0.5%) which has the potential to form calcium oxalate stones in the kidneys but it almost never occurs in patients who are well hydrated.

Glucose-6-phosphate dehydrogenase (G6PD) deficiency is typically screened for prior to high dose IVC administration because of the risk of haemolytic anaemia. The lower IVC doses typically used for quality of life improvement (e.g., ≤10 g/d) won’t cause any hemolysis even in individuals who are G6PD deficient.

High dose IVC is contraindicated for patients with chronic kidney disease due to the inability of the kidneys to clear high circulating concentrations.

Does IVC Interfere With Chemotherapy or Radiotherapy?

Because vitamin C has a relatively short half-life of 2-4 h in circulation due to rapid renal clearance, IVC is typically administered the day before or after chemotherapy administration. Human trials have shown no adverse effects from combining IVC with a number of different chemotherapeutic drugs, and in many cases decreased toxicity and improved health-related quality of life measures.